A downloadable game for Windows

You are out driving, and suddenly realize that you are out of gas, you stop at a remote farm house to see if they can help you with a bit of gas for your car. But..

Here is some links:

Any and all support is much appreciated!

Really enjoyed this demo. Would love to see a full game someday! I'm definitely gonna check out your other work.

Good game, all the pigs survived! :)

It's Been Awhile since i played a good horror game. Thank you for the Spooks. (Here's a 6 minute playthrough video)

i love your game and content keep it up

Reply
Games Do Titio31 days ago
Gameplay não comentado! Uncommented gameplay!
Reply
Tasef32 days ago
Can not wait to play the full version of it i loved it
Reply
PennySaver32 days ago

A fun conclusion to Indie Game Week on my channel! A big focus for me was making sure the pigs lived!

Reply
theraven_v150 days ago
the final game i played for this video i had so much fun with some of the scares in this! the monster design was super sick too
Reply
Marcos Outsider54 days ago

I'm pretty sure they're some type of aliens, LOL. It was fun. In my first try I didn't got the flashlight for some reason and got upset because everything was really dark, but then I noticed my mistake and started again.

I'd love to see more of this game!  Enjoyed all the pig butts.

Would be super awesome to see this game multiplayer

wow! Your games are amazing and will be playing many more!!

i love your game and content keep it up

Reply
Hadlandish87 days ago
Loved it! Always kept me on my toes. very creepy
Reply
ph2t9289 days ago
good game, thanks !
Reply
Korveenn90 days ago

can u do multiplayer

Hey man, really good intro to a potential game, keen to see what happens next.

The sounds alone scared me straight but I hope this isn't the end of the game my dude...

Excellent game so far! Definitely interested in exploring more about this game. Here's my playthrough, some of the jump scares really got me.

Reply
Tasef113 days ago
Greek gameplay
Reply
BalimoreBlindGaming120 days ago
Thanks for letting me play your game good sir, as always.
Reply
Max Horror120 days ago

Thanks bro! :) Working to see if I can finish my next project.

Definitely one of the more interesting ones. I liked the build up keep up the good work

The jumpscares are great but seriously... the sounds effects are amazing. Great work! First game of the video ☺️

Reply
IGT100130 days ago
The title screen and options button were both missing/inactive.  I had a LOT of fun playing the game!  Several great scares!  and multiple heavy chills.  Fantastic work, 5 stars!
Reply
MrDreaming132 days ago

I've played a few of your games now Max, and it seems like you put so much care into all of them.

This may be one of your earlier ones but it's still so good. Keep it up, you definitely have something going here !

I recorded the whole thing if you want to see my reactions to it all :)
Reply
CaffeinatedGamerYT135 days ago (1 edit)

Great atmosphere, I also played “the appartment” and see there’s a lot progress in your skills. For example the intro was pretty good, cinematic, good sounds. During the hole game then I felt the tension pretty steadily and I got scared more and more. That’s what I call a great Max Horror experience.

Reply
Famigerado_Jhomas144 days ago
Farm terror is always very macabre, and this one was no less than expected, on the contrary, it seemed even worse than I anticipated!

Reply
Lanosmire170 days ago
I really, really liked the atmosphere you created here. The game wasn't too long, so you didn't have time to get used to the environment, which meant you were able to push us to move the story along.

Story 4/5 - There is only so much and it's quick, but what I did see was well put together

Sound 4/5 - Great atmosphere and soundscape. Nothing that stood out, but as a cohesive soundtrack and effects it really worked

Gameplay 4/5 - Nothing was really complicated, or any full mechanics. It ran incredibly linear, but in this aspect it was to tell a story and with this it did it well.

Design 4/5 - There were a few graphical glitches, and a few parts I was trying to understand on the design of the farm itself. But the environment you created helped the foreboding atmosphere, and the creature design was very well done. I enjoyed that you kept the creature out of view of sight for most of the game, so it built up mystery behind it and the disappearances.

Overall 4/5 - The parts I truly enjoyed were small parts. The creature just waiting by the door. Didn't move, but was there foreboding, and I especially loved when it grabbed her. That I don't see in horror games very often, as most things happen off screen. So that was just a chef's kiss to add.

I plan on visiting your other stuff, as I like what you've made so far. Really recommend this anyone playing.

why won't it let me access the option button?

Cool scares that weren't overused and i really liked the shed attack scenario, not many games do things like that and it was good, the graphics kept it intact and the atmosphere was solid with sound effects playing randomly and you can connect it to the monster as you have seen it at the beginning and it makes you feel like he could be anywhere. Thank you for making this! 3rd Game. 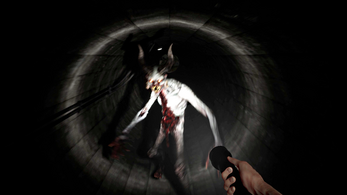 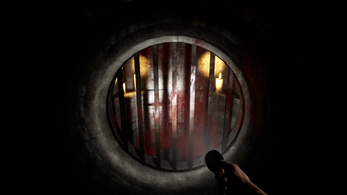 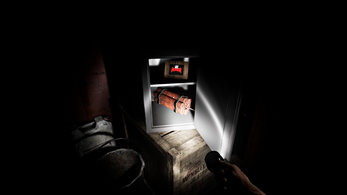 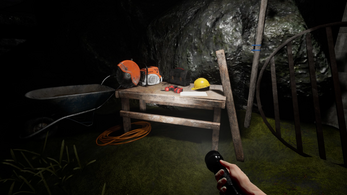 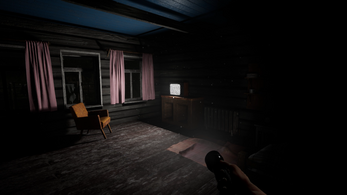 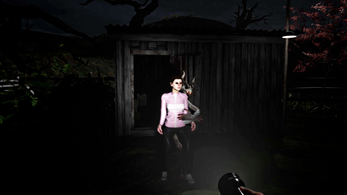